My friend, Debbie, called this morning to see if I was interested in watching her husband, George, work with his bees.  I sure was!!

I was instructed to wear long pants…she had a long sleeve white shirt that I could borrow, rubber gloves, bags for my feet and a bee hood.  Once I got there she taped on the gloves and the foot bags…showed me how to put the hood on and tie it in place…Here I am… The boxes in the wheel barrow in front of me are the “supers” …one will be added to each hive. He has a total of 4 hives.

The hive that he is working on doesn’t have a super yet. I think it’s a new hive. He just put a new queen in it a few weeks ago. He is going to see if he can find her so I can see what she looks like. 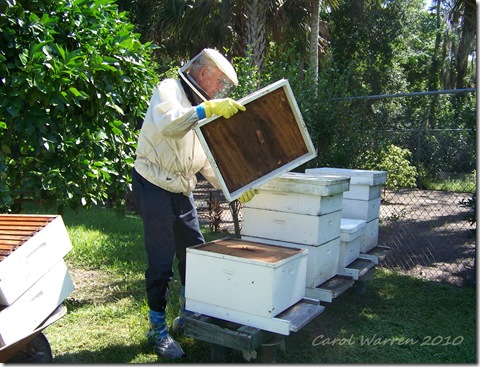 This is one of the frames in the hive, but we didn’t see the queen. George said she can move from frame to frame quicker than he could check them so she could be in there. 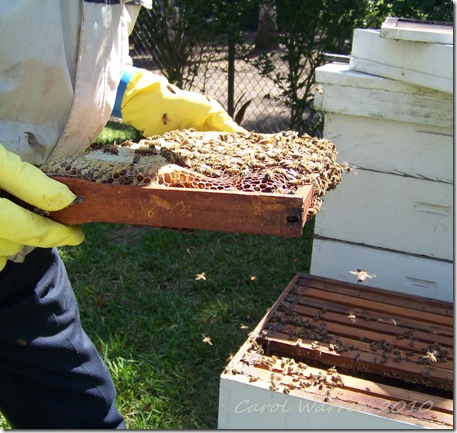 After he used a putty knife to clean up the wax from the edges…it was put back in place.  All of his movements are very precise and SLOW…so as not to stir up the hive or crush any bees. 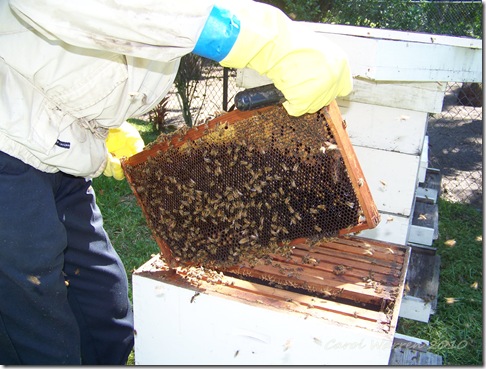 This is the third hive. He took a couple of frames from each hive, trying to find a queen. He did find the queen cell, but it looked empty.

This is the spot it was lifted from…the bees were buzzing us but I didn’t feel that they were “angry”….but then I don’t really know what angry bees would be like…they showed interest in the camera and my yellow gloves. 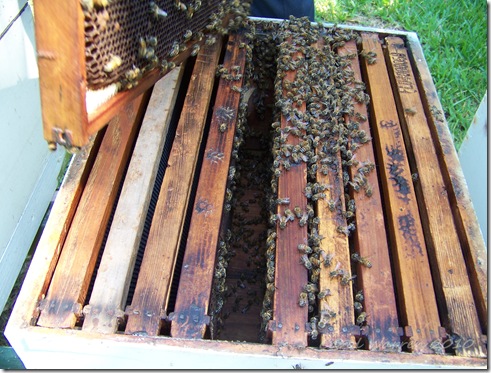 George said this is a very strong hive. It definitely had a lot of bees.….I believe this is “brood” on this frame. 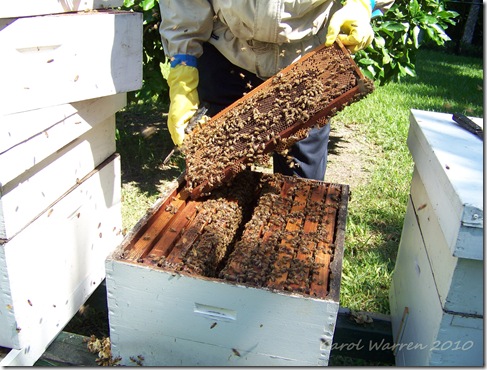 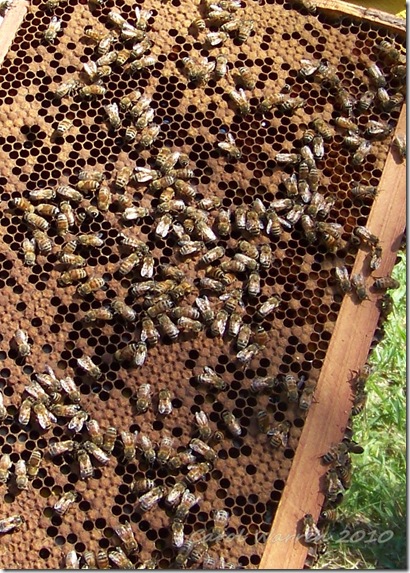 and an even closer look….you can see some of the bees leaning part way into the cell…they are feeding the larvae.

At  http://www.roctronics.com/BEE-BASE.HTM I read that the eggs hatch into larva in 3 days…then the nurse bees feed them for 6 days then the cells are capped and the pupa takes about 14 days to become a female worker bee…..Queens take less time and Drones (males) take a day or two longer. 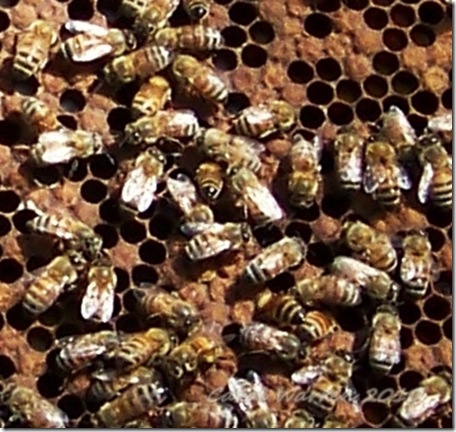 This guard ( queen extruder) prevents the queen from leaving the main hive and going up into the supers. The spacing is designed to let the worker bees through. 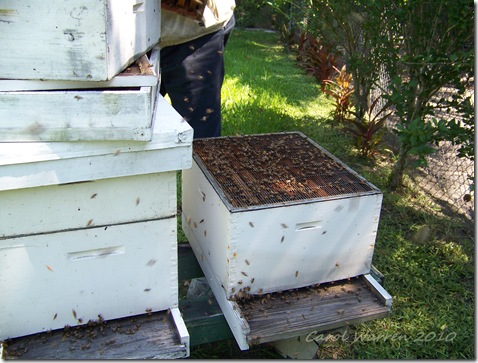 He added a super to each hive in anticipation of the palm trees flowering shortly.

George got everything back together and we called it a day.  He wont check them again until Nov. 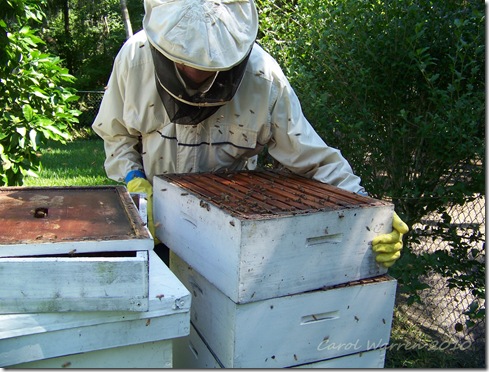 It was a lot of fun and kind of exciting with all those bees buzzing around us….Debbie did a great job taping me up…I didn’t get stung once. …but I was just an observer….I didn’t actually do anything.

I was surprised to learn that the worker bees are female…and there are thousands in a hive.  The Drones are the males…they mate with the queen then die.

Here are some of the sounds of working with bees…. 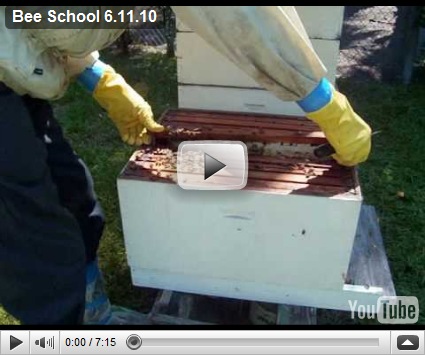 4 hives of bees buzzing around….is a lot of bees. Most stayed on the frames or on the front porches of the hives…but many were buzzing us..checking us out.  I had a great time. Hope I am here when it’s time to pull honey.

I’ve seen these large raptors soaring overhead many times….as I walked out the back door one was right over head…but by the time I got the camera they were in the distance and this was all I was able to get. 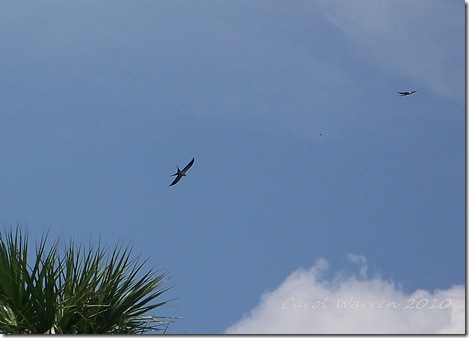 I’ll keep trying…they are beautiful birds and a lot of fun to watch while they ride the thermals.

We spent 3 weeks on the boat traveling the St Johns River, FL.

When we got home, Jim was catching up on yard maintenance and suggested I go out back and take a picture of a flower he’d never seen before. It’s a Passion Flower or May Pop. There was a 6’ length of vine lying on the ground. I picked it up and laid it along an Elderberry bush. I’ve spotted 3 more vines in the same area….2 of them over 8’ tall. Several buds. 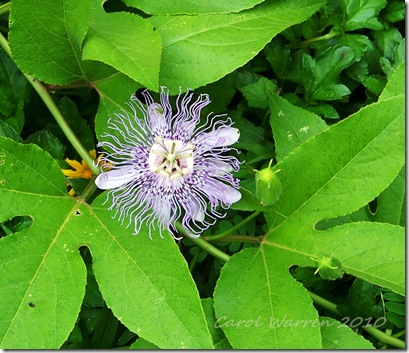 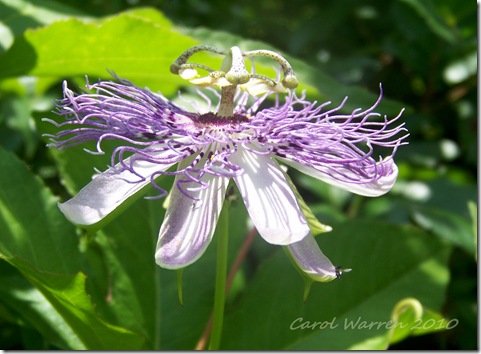 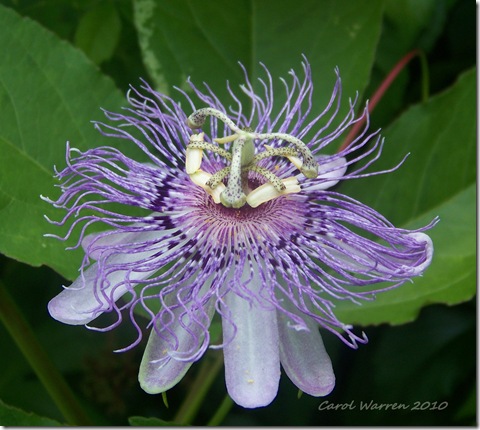 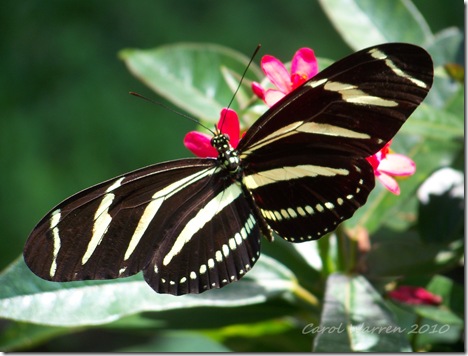 We have many of there flying around during the summer….now I will be looking for the caterpillars on the Passion Flower plant.

I took these last year.  Isn’t it a beauty?

I am going to start some cuttings of the Passion Flower and see it I can get them growing in several places.